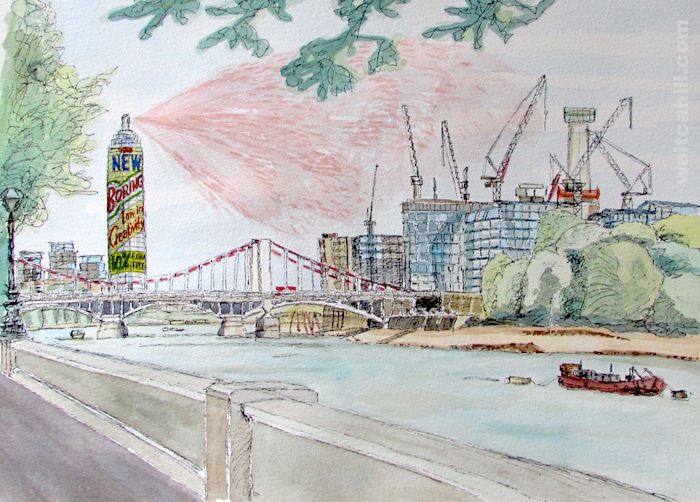 I took part in the Developing Landscape project bringing together artists, interested in exploring and painting the changing landscapes of South West London.

Vauxhall and Battersea Riverside
The story of this painting starts last summer on a community farm near Wallington ten miles south of Central London, as part for my then employers volunteering program. As my colleagues and I harvested potatoes we had a clear view of the London skyline including the Vauxhall Tower to the west. We tried to identify the buildings and it struck me that the endeavour of planning, building and construction carries with it great responsibility that I feel is being taken too lightly in our society. These buildings could be seen by many of London’s nine million or so population at any time and for centuries to come. Will they stand the test of time and will future generations look back with wonder and with respect at what was built? I see the lack of creativity and acceptance of it as being rather contagious and it is spreading just like the chemical and vapours from an aerosol can. It was suggested to me that the Vauxhall Tower looks rather like a kitchen roll holder or an aerosol can. I opted for the latter as it fitted the metaphor well.